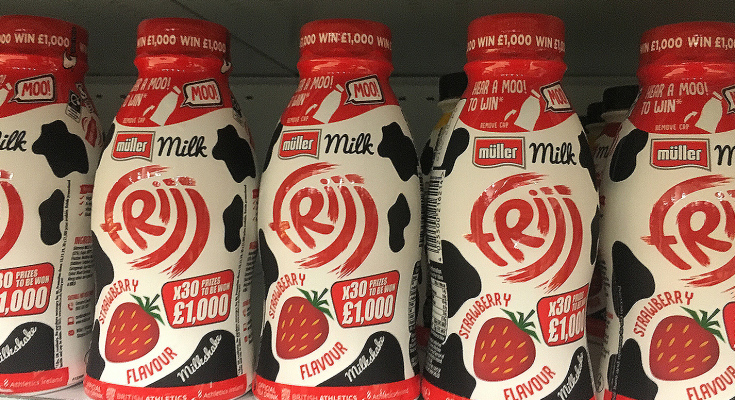 Jun 24, 2019News, Prize promotion, shopperComments Off on FRijj Milkshake are giving shoppers the chance to win with their latest on pack promotion

Shoppers up and down the country have the chance to win £1,000 if they are greeted with a ‘Moo’ sound when opening the Frijj Milkshake bottle.

The fun sound chip promotion runs across their chilled & UHT products; Fudge Brownie, Chocolate, Strawberry & Banana milkshakes, and has hit fridges recently across all major retailers and convenience outlets in the UK. There are 30 x winning bottles across the UK & Northern Ireland and shoppers have until October to get their hands on this winning bottle.

Emily Shepherd, Account Manager at ATOM Marketing, said: “ATOM have worked with Müller for over 5 years supporting all of their on-pack promotions across their varied range of brands. This campaign for FRijj is a great one to be working on, it fits the fun nature of the brand and is supporting FRijj retailer sales across the summer period.”

The campaign will be supported by a social media campaign as well as retail POS campaigns.