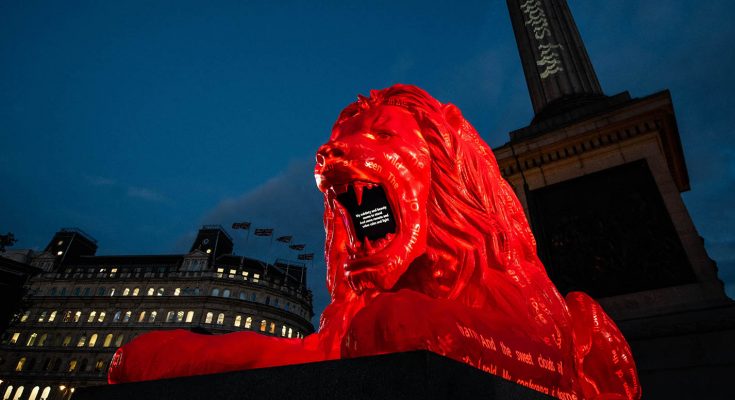 From 18th to 23rd September, one of Trafalgar Square’s iconic lion statues was joined by an additional florescent red lion to promote London Design Festival. The interactive installation was created by ES Devlin in collaboration with Google Arts & Culture as part of a year-long project. Exploring the parameters of design and artificial intelligence, the installation incorporates a deep learning algorithm developed by Ross Goodwin, creative technologist at Google.

Following the Festival, the sculpture will be digitised as part of an online exhibition on Google Arts & Culture so people all over the world can experience the groundbreaking artwork. The project is supported by digital commissioning body The Space as part of its work to ensure the broadest access to the arts through digital technologies. Cast in 1867, the four monumental lions in Trafalgar Square have been sitting as silent British icons at the base of Nelson’s Column for the past 150 years.

This new lion was not silent: it ‘roared’ poetry, and the words it ‘roared’ were chosen by the public who were invited to “feed the lion,” words. By daylight, the ever-evolving collective poem was shown on LEDs embedded in the mouth of the lion. By night, the poem was projection-mapped over the lion and onto Nelson’s Column itself: a beacon of streaming text that invited others to join in and add their voice.

Devlin says the idea for the sculpture was prompted by a walk through Trafalgar Square with LDF Chairman Sir John Sorrell during last year’s Festival. “He said: ‘Landseer never wanted those lions to look so passive; he proposed a much more animated stance, but Queen Victoria found it too shocking.’ The thought lodged in my mind. What if we could invest the lion with a diversely crowd-sourced collective poetic voice?”