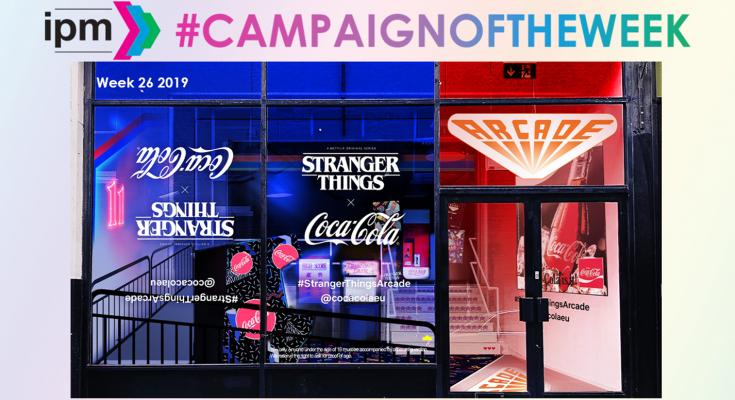 To celebrate the launch of Stranger Things Season Three, Coca-Cola and Netflix are giving fans the ultimate chance to relive the 80’s and transport themselves to Hawkins via the Coca-Cola x Stranger Things Arcade; a pop-up gaming arcade that will feature some of the most nostalgic games in the show.

With the season launching on 4th July, the hit show will be set during the summer of 1985, when the whole of America, including Eleven, Will, Dustin, Mike, Lucas and the town of Hawkins, were talking about Coca-Cola’s latest release, “New Coke” – the introduction of a reformulated Coca-Cola, which received consumer protest and calls for original Coca-Cola to return, which it did in the form of Coca-Cola Classic as is known today.

Guests will have the opportunity to win prizes via a live gaming leader board and enjoy Stranger Things photo moments, as well as Coca-Cola zero sugar, and will have a secret upside-down world hidden, only accessible to those with a Stranger Things eye.

The first 800 who manage to enter the upside-down world, will win a limited-edition upside-down Coca-Cola x Stranger Things can.

The Arcade will open its doors on the 11th July at Shop 4 (Brick Lane, Spitalfields) and entry, play and refreshments are free.

Event: Coca-Cola and Stranger Things welcome fans to experience the famous Arcade in London, offering the chance to play the original arcade games featured in the series and collect a limited-edition Coca-Cola x Stranger Things Upside-Down can*

T&C Overview: Entry to the Arcade is free. Visitors will be provided with Coca-Cola x Stranger Things tokens to play the arcade games.

*Only 800 ‘Upside-down’ Coca-Cola cans are available on a first come, first serve basis. Those aged under 16 must be accompanied by an adult.