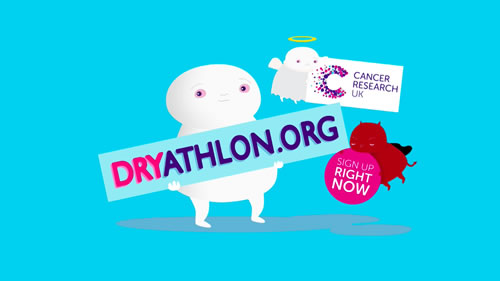 Cancer Research UK is again challenging social drinkers to take a month-long break from alcohol with the return of its fundraising campaign, Dryathlon.

Dryathlon 2016 sees a new advertising campaign, created by Karmarama, which will appear across TV, radio, digital and social media. A specially-written song alongside animation will be used across the channels.

Echoing the fun and light-hearted tone of Dryathlon, the new campaign will encourage Dryathletes to still have a good time in January and be proud of being sober, positioning not drinking for a month as simply removing one vice temporarily from their life. There is still ample opportunity for fun, while at the same time raising money to help beat cancer.

Dryathlon kicked off in 2013 and focuses on the willpower required to go dry for a month. Participants, known as Dryathletes, undergo the dry challenge of 31 days without alcohol to raise money to beat cancer sooner.   They can do this through sponsorship from friends and family or pledging the money they have saved by keeping off the booze.

Anthony Newman, director of marketing at Cancer Research UK, says: “Dryathlon is back and we want it to be our biggest and best yet. Dryathlon is the original campaign that challenges the nation to put down their pints. Since 2013, it has raised over £17m for our work to beat cancer sooner – so the pressure is on for a brilliant fourth year in 2016.”

Newman adds: “To carry on this success, it’s essential Dryathlon continues to innovate and appeal, and I believe the new campaign will achieve this. It feels fresh, fun and builds on what we’ve learnt from previous campaigns, highlighting our message that Dryathlon is not about staying in but getting out and enjoying yourself.”

Dryathlon will run from January 1st to 31st January 2016, with registration now open at dryathlon.org. Participants can take part on their own or as part of a team.

Cancer Research UK is the world’s leading cancer charity dedicated to saving lives through research. Its pioneering work into the prevention, diagnosis and treatment of cancer has helped save millions of lives. It receives no government funding for its and relies entirely on donations.

Karmarama is one of the largest independent marketing communications companies in the UK, with 300 specialists in advertising, direct, data, digital, content, social media, mobile and public relations. Karmarama works with global clients such as Honda, Nintendo and Costa Coffee internationally; in the UK, its clients include BT, Cobra, Iceland and Plusnet.