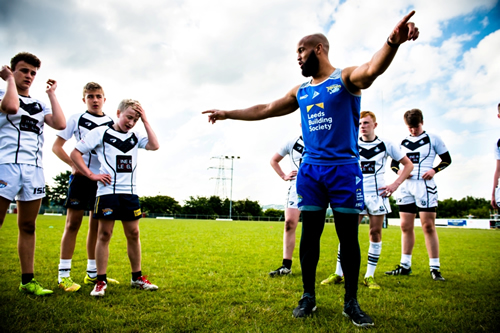 Leeds Rhinos Foundation, the charity set up by rugby league club Leeds Rhinos, has launched a film that showcases the work going on under the foundation’s ‘Changing Lives Through Sport’ philosophy.

The film, created by Leeds-based agency, Brass, stars Leeds Rhinos player and Foundation trustee Jamie Jones-Buchanan. It captures how the lives of children and adults in deprived communities across Leeds have been enriched through sport.

Shot at four different locations across the city, to reflect the Charity’s wide variety of work, the 136 second film shows the Foundation inspiring young people in local schools as well as working with Specialist Inclusive Learning Centres and TryZone Education Centre to improve the lives of adult learners and those with disabilities.

Dr. Neil Kaiper-Holmes, chairman of the Leeds Rhinos Foundation board of trustees, says: “It has been a long held ambition to have a top quality product that vividly describes what the Foundation is all about. But the costs of production have always been prohibitive for a relatively small charity such as ours, with a turnover of less than a million pounds a year. Thanks to the generosity of in-kind sponsors Brass and Mob Sport, we now have a vehicle to enable us to attract and inform even more sponsors and donors.”

Following an exclusive premier of the film on Wednesday 21st October at an event to celebrate the Foundation’s tenth anniversary, the charity’s strategy to connect emotionally to a new audience continues through adverts, exhibition banners, social media assets, photography kits and a video pack. All this has been created by Brass to help the Foundation raise awareness of its achievements and attract new sponsors.

Since being founded in 2005, the award-winning charity now works with an estimated 50,000 people a year under its five focus pillars of Education, Health, Sport, Art and Heritage.

Brass is a full-service, communications agency which offers digital, research, advertising, design, PR, SEO, media, shopper and promotional marketing to a range of local and national clients. In June, the agency won an IPM Gold Award for its work on the digital element of Lucozade Ribena Suntory’s Lucozade Sports Conditions Zone campaign for the isotonic sports drink.