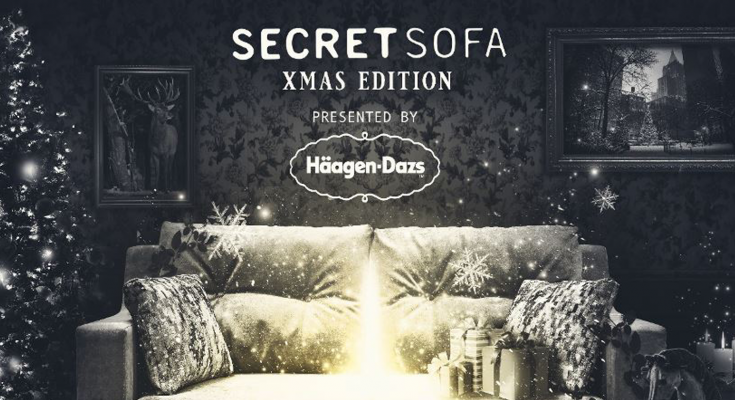 Secret Cinema’s award-winning lockdown entertainment series Secret Sofa presented by Häagen-Dazs will return for a festive finale on Friday 18 December 2020 at 7:30 pm (GMT) to raise funds for Crisis – the national charity for people who are homeless.

Keeping spirits bright this Christmas and spreading joy, Secret Sofa by Häagen-Dazs will return to facilitate a virtual seasonal screening of the 2003 comedy Elf, starring Will Ferrell as Buddy.  The beloved comedy movie is gift-wrapped around Buddy, who as a baby stowed away in Santa’s sack and ended up at the North Pole. Raised by elves, as an elf-like adult, Santa allows him to go on an adventure to New York City to find his birth father and that’s where the shenanigans begin!

So, embrace your inner elf, start working on that costume and prepare to Ho Ho Ho with laughter.  And if you’re running short of inspiration sign up to the Secret Sofa by Häagen-Dazs newsletter where you’ll be immersed in the world of the film, given costume suggestions and plenty of ideas for how to shift the dial on the Clausometer.

You will also receive a special Häagen-Dazs discount code to order their new indulgent chocolate nut range dubbed as ‘the chocolate on every elf’s lips’ to order via an exclusive collaboration with Amazon Fresh. And as a tribute to Buddy the Elf, Häagen-Dazs and Piper-Heidsieck have also put a twist on an iconic classic to deliver the must-have champagne ice-cream float of Christmas with their original ‘Bud’s Fizz’ which you can recreate at home before settling in to watch the film.

There will be an after-party on Zoom from 9:45 pm (GMT). Tickets are only £3 and all proceeds will go to Crisis.

In a bid to spread some joy and raise some much-needed funds for Crisis, you are encouraged to share your best (s)Elfie photos enjoying your Häagen-Dazs, with the hashtag #ElfieForCrisis. Everyone deserves the dignity of having a safe place to call home. To help fight homelessness this Christmas and beyond, we’re asking all elves to show us their Christmas cheer with their best (s)Elfie pics and for every post uploaded on Facebook and Instagram until Friday 18th of December, Secret Cinema and Häagen-Dazs will donate £1 to Crisis.

The film is available for streaming across: Apple, Amazon, Google, Rakuten, BT and Microsoft.

For eight weeks over Summer lockdown, Secret Sofa in collaboration with celebrated ice cream brand Häagen-Dazs entertained the nation by facilitating a virtual in-home screening of Secret Cinema’s most celebrated and critically acclaimed films, as well as lesser-known gems. This hugely popular home entertainment series that included bespoke content, character narratives and interactive elements, sparked the imagination of the nation with people around the country creating their own cinema experiences at home, winning consumer and industry awards in the process from the likes of Time Out and The Drum including The Grand Prix for best-in-class experience. With 2020 permanently on the naughty list, this is the perfect way to end the year on an uplifting high.

Max Alexander, CEO, Secret Cinema comments: “The Secret Sofa series was a smash hit and we brought joy to so many people at a time when they really needed that ‘virtual’ connection and interaction.  The audience participation, which is at the heart of every Secret Cinema experience was incredible and our social media channels were full of home videos and pictures of people joining in and celebrating the film of the week. Back by popular demand with our partner Häagen-Dazs, we wanted to thank our fans, spread some pre Xmas joy and raise money for Crisis.”

Arjoon Bose, spokesperson for Häagen-Dazs comments: “Secret Sofa by Häagen-Dazs allowed us to bring thousands of #HaagIndoors moments to living rooms across Britain and deliver a joy-filled experience while creating a new cultural moment during an unprecedented period of isolation. The love from our collective consumer base as well as the industry recognition was truly a vibe that captured the heart of the nation. We’re delighted to make a Christmas comeback with our friends at Secret Cinema to finish 2020 with cheer and communal vibes with a touch of our signature indulgence but more importantly, be a real force for joy during this season by helping the homeless.’’

Jon Sparkes, Chief Executive of Crisis comments: “We are hugely grateful to Secret Cinema and Häagen-Dazs for donating the proceeds from their fun festive screenings to Crisis. Christmas will be different for us all this year, but thanks to the generosity of our supporters we’ve been able to adapt our services so that we can still be there for the people that need us – providing a safe place to stay, companionship, food and support – and hope for a future away from homelessness.”