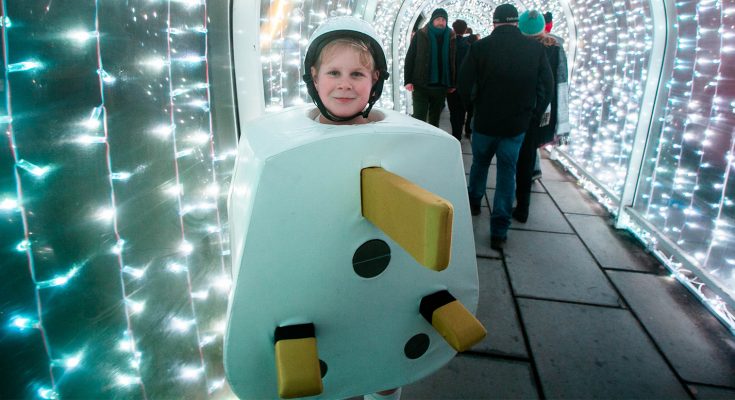 Dec 10, 2018experiential, NewsComments Off on Sainsbury’s Bude tunnel Christmas lights are switched on by ‘Plug Boy’

Sainsbury’s is today lighting up the town of Bude as its unusual supermarket tourist attraction gets a festive makeover just in time for Christmas. The famous car park tunnel is set to become a ‘light up spectacular’, with a guest appearance from Sainsbury’s very own Christmas icon, ‘Plug Boy’, to celebrate the switch on of thousands of LED lights spanning the full length of the tunnel.

The Cornish coastal resort’s unlikely tourist attraction has been the talk of the town, with hundreds of visitors leaving reviews online, rating the tunnel as Bude’s number one tourist destination earlier this year. Upon hearing about a local Christmas initiative called ‘Light up Bude’ – a fundraising effort by the community to put Christmas lights in Bude’s public spaces – Sainsbury’s has stepped in to give the town a festive surprise.

With the support of a number of local schools and companies, the switch on of Bude Tunnel will depict a series of festive colours and changing interactive light displays, accompanied by festive music sung by a local school choir. Visitors will also be able to share their experience via a winter themed photo wall.

Stephen Gent, store manager at Sainsbury’s Bude comments: “We’ve been overwhelmed with the positive response for the Bude Tunnel and we’re delighted to be working with the community to give it all we’ve got and bring the people of Bude something magical this Christmas. It’ll be a shopping trip they’ll never forget.”

The Bude tunnel will be lit up from Friday 7 December, until Thursday 13 December and will still operate as the main thoroughfare between Sainsbury’s Bude and the store car park.