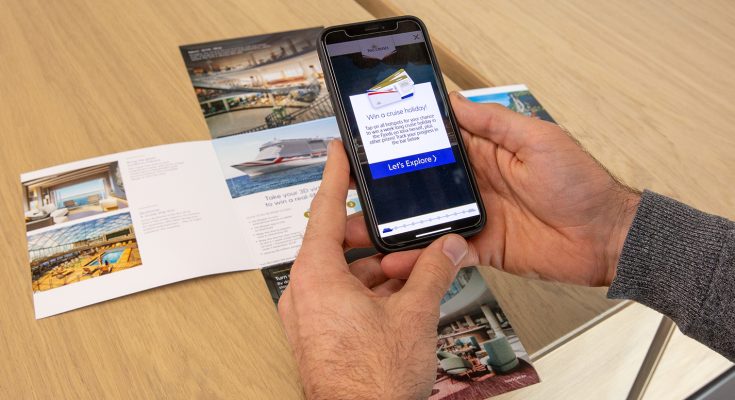 In a cruise industry first, P&O Cruises has launched an augmented reality campaign to promote its latest new ship, Iona, and bring to life its onboard experiences in interactive 3D.

The initial 3D renders for Iona were produced by content agency Sunday from which the augmented reality experiences were crafted by creative agency Founded. With technology delivered by  augmented reality pioneer, Blippar, this new campaign has been created to allow travel agents and consumers to experience Iona 18 months prior to the completion of the ship.

Almost 300,000 pieces of direct mail have been sent to travel agents and past guests with details of how to download the Blippar app, which will provide them with the ability to experience Iona in augmented reality. Once the Blippar app is opened and a phone is held over the image of Iona, the ship will burst into life and may be explored from bow to stern. Included in the AR are images of the SkyDome, the vast glass domed entertainment and relaxation area on the top deck, cabins and the Grand Atrium. As more Iona images and designs become available, new augmented reality experiences will be added. Anyone ‘blipping’ the ship before November 1 will have a chance to win a one-week cruise on Iona.

Christopher Edgington, P&O Cruises VP Marketing, said: “Iona’s scale and breadth of experiences will offer holidays like never before and this demands marketing like never before. With Iona going on sale two years before its launch, we realised that we needed to create new and innovative ways to reach and engage both existing and potential guests. The obvious solution to this was our first ever augmented reality campaign.”

Edgington continued: “A week after launch we have beaten our targets for number of blips and dwell time which proves that interactive marketing and the ability to get a much more intimate and inspiring view of the ship is a hit with our guests.”