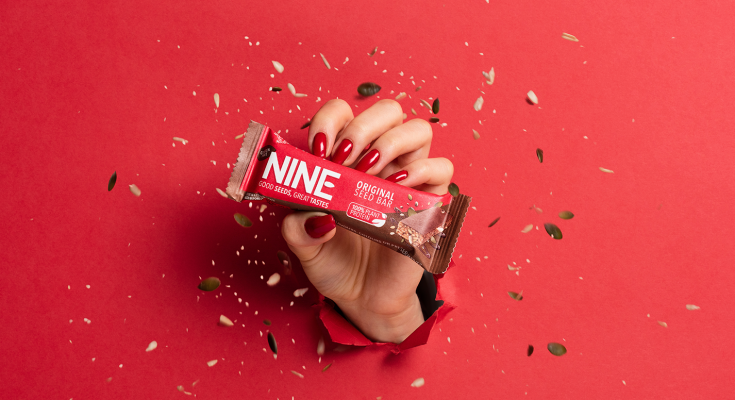 NINE have announced a new on-pack promotion and out-of-home campaign starting from July.

Every bar is made with a unique blend of 4 nutritious seeds (sunflower, pumpkin, sesame and hemp*) combined with exciting flavours using nothing but natural ingredients so they’re a great source of compact natural nutrition and energy.

Michael Cheeseman, Brand Manager at NINE, says: ‘’Whether you’re an ‘iron man’ runner, serious about fitness, a busy commuter or a parent on the school run – everyone has their daily marathon to run. NINE are uniquely positioned to be at the heart of what consumers are looking for when choosing a healthier snack thanks to our mix of seeds and natural ingredients which provide a great source of plant-based nutrition and energy. So, what better way to support this than an on-pack promotion that taps into consumers desire to enjoy a healthy lifestyle. We are delighted to be working with Fabyouless on this promotion to offer free 60-day free membership, the Perfect reward for those living or seeking a healthy lifestyle’’.

Running for six months across NINE’s 4x40g multipacks (Original, Berry & Chia, Pumpkin, Cocoa Raspberry and Peanut flavours) with a total value give away to free-from customers across Tesco, Morrisons and Ocado of over £2m. The free 60-day membership will allow customers to enjoy all the benefits that come with being a Fabyouless member. To support this on-pack promotion NINE will launching a nationwide out of home campaign in July running for two weeks across multiple digital 6 sheets.