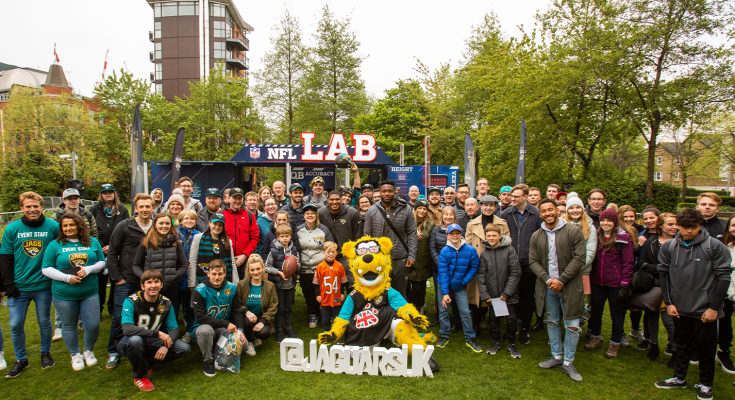 On Saturday 27th and Sunday 28th April the Jacksonville Jaguars are bringing the NFL Draft celebrations to the UK with a two-day fan festival on London’s Southbank. And if that wasn’t enough, Jaguars wide receiver, Dede Westbrook will be joining in the celebrations – meeting fans, taking part in a Q&A and will also be revealing the 2019 Jags NFL 4th round Draft Pick live on US national TV from London, alongside one very lucky social media competition winner.

An additional 10 entries will also receive an exclusive invitation to join Dede Westbrook at the London & Partners studio, the Mayor’s official promotional organisation, ahead of the NFL Draft pick announcement.

When: From 10am until 6pm on Saturday 27th and 11am on Sunday 28th April
Where: Bernie Spain Gardens, Southbank, London

With a hub of NFL entertainment and activities planned there is something for everyone at the Jaguars Fan Festival – from American Football fanatics to casual spectators or even passers-by new to the game.

The focal point will be a fun skills challenge – no sport gear required! – giving fans of all ages the chance to take on a series of physical challenges from the NFL Combine test. From vertical jump to throwing accuracy, fans can compare their stats to the pros and be in with a chance of winning some great prizes. There will also be a Madden video game challenge taking place throughout the day.

Dede Westbrook will be interacting with fans at the festival and will also be doing a Q&A.

Dede Westbrook, NFL Star, said: “We’re really looking forward to coming to England for the Jaguars Fan Festival. It looked like it was such good fun last year that we can’t wait to get involved. I know that we have some amazing fans over in the UK and I am looking forward to meeting them in person – they really make it like a second home for us.”

Furthermore, food and beverage offerings as well as a merchandise zone will add to the atmosphere to ensure the Jaguars Fan Festival is a great day out in the capital.

In addition to the Jaguars Fan Festival, the team are once again celebrating the NFL Draft with an exclusive competition offering one lucky fan the opportunity to announce the Jaguars 4th round pick alongside Dede Westbrook.

Hussain Naqi, Senior Vice President and International Development, at Jacksonville Jaguars, said: “This is such an incredible opportunity for our UK fanbase to get involved with the team. We are delighted to have made history the last four years by bringing an NFL Draft announcement to the UK. Given our extended commitment to play here
every year until at least 2020, it is fitting that once again we’re giving one of our UK fans the chance to share in the excitement of the NFL Draft.”