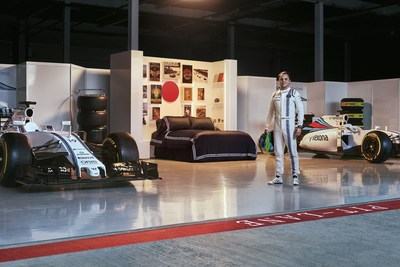 Martini, title sponsor of F1 racing team Williams, is partnering Airbnb to offer the chance to spend a night in the Williams Martini Racing garage at the Silverstone Circuit, the night before the 2017 Formula One Rolex British Grand Prix.

One winner and a guest will eat, drink and sleep in the home of one of the world’s most prestigious names in motor racing on July 15, 2017.

Access to the team garage is extremely restricted during a Formula One weekend so the lucky winner and guest will be one of very few people to enter the inner sanctum of the team.

During the Martini and Airbnb experience, the winner will receive a guided tour of the garage and be met by the team’s Deputy Team Principal, Claire Williams, before they sleep next to the 2017 Williams Martini Racing FW40 cars and 50 years of Martini Racing history.

This money can’t buy experience includes meeting Felipe Massa and will culminate in the winners joining Williams Martini Racing for a racing experience of a lifetime which coincides with the team celebrating their 40th anniversary.

Felipe Massa, Williams Martini Racing driver, says: “It’s amazing what Martini has done for racing since its return to Formula One.  They really understand the joy and passion of the sport – and celebrate it on and off the track. For me, the Williams Martini Racing garage has always felt like a home away from home and I can’t wait to welcome the winners at Silverstone this summer.”

Zara Mirza, Global Head of Creative Excellence, Bacardi Limited, adds: “At Martini, we’re not just a racing sponsor, we’re race fans. Aside from driving an F1 car, spending a night in the garage is like waking up in your own racing dream.”

The MARTINI and Airbnb Night at the Williams Martini Racing garage is the latest in Airbnb’s ‘Night at’ series, which sees guests stay in iconic locations around the world. It is open to race fans from April 27 to May 16, 2017. Applicants must be aged 25 and over and a resident of Belgium, Italy, Germany, Russia, Spain or the United Kingdom.

To enter participants must write 100 words or less explaining what they love about racing and why they should be the lucky one chosen to stay the night at the Williams Martini Racing Garage at Silverstone before the 2017 Formula one Rolex British Grand Prix.

Martini has been involved with motorsport since 1968 when Martini Racing was formed. Martini was one of the first non-motorsport brands to sponsor a racing team. Martini signed up as title sponsor of British owned Williams F1 team in 2014; its previous involvement with F1 was with as an official partner of Scuderia Ferrari from 2006 to 2008.

Williams is a leading F1 team and advanced engineering company. Formed in 1977 by Sir Frank Williams and Patrick Head, the team has secured 16 FIA Formula One World Championship titles since then.