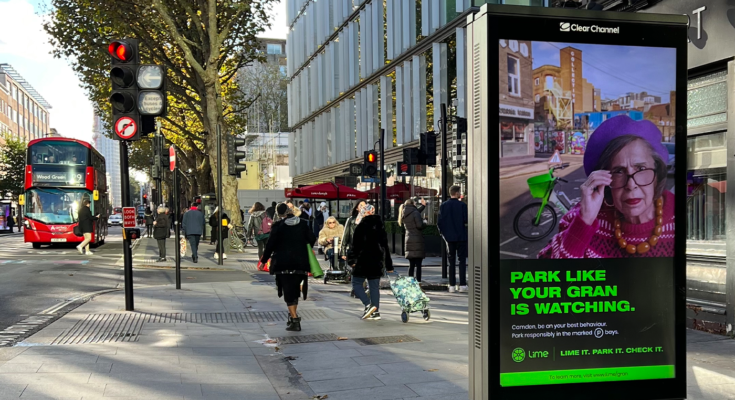 Lime – London’s largest shared e-bike operator – has partnered with Creative Communications Agency PrettyGreen and its sister Experiential agency The Producers, on a campaign to playfully educate Londoners on responsible e-bike parking in the boroughs of Camden, City of London, Hackney and Westminster.

The campaign “Park Like Your Gran Is Watching” is based on the insight that we can be lazy with our actions when we don’t think anyone is watching. Emma Grace, ECD of PrettyGreen commented: “We didn’t want Lime to come across as finger pointing and preachy, the majority of Lime riders park considerately, it’s the minority that just need to be more mindful.  With the campaign we wanted to imbue the friendly tone of the brand, and “Park Like Your Gran Is Watching” plays on ‘being on your best behaviour’ vibes and doing the right thing – perhaps they might act differently, or think twice if they thought their Gran was watching.”

Lime’s mission is to build a future where transportation is shared, affordable and carbon-free, and 2022 has seen a huge growth in the popularity of its e-bikes in London.  But with growing usage and new riders, misparking has become an increasing challenge. Parking without consideration can be disruptive for pedestrians, buggy and wheelchair users as well as the visually impaired.

Ellie Bird, Communications Manager at Lime in the UK, commented: “We love that Londoners are embracing our e-bikes. Shared, sustainable transport options like ours offer a great alternative to cars, with over 3.5 million kgs of CO2 saved in these 4 London boroughs alone since we launched in London almost 4 years ago. The majority of our riders park responsibly, and we’re taking action against those that don’t with warnings and fines. But we know that education is also key. This campaign is all about raising awareness of what good parking looks like to help people end their rides respectfully and safely.”

The campaign, cast with London Grans, will consist of digital OOH sites and legal flyposting, coupled with clean Graffiti sites to signpost on the pavement where Lime bikes should not be left. It launched on 17 Nov 2022 and will run until early December.