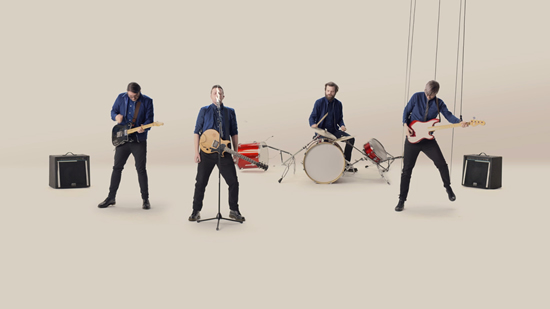 Bupa UK is running a one-of-a-kind interactive music video that shows people how their bodies are performing. Starring band The Futureheads, the campaign aims to raise awareness of Bupa UK’s new health assessments, developed to help meet changing healthcare needs and demands of people across the UK.

An online quiz will allow consumers to create a unique, personalised version of the band’s ‘Heartbeat Song’ to show how their health is performing. Each of The Futureheads band members represents a part of the body – the guitarist is the liver, the drummer the heart, the bassist the bones and the lead singer the lungs.

Participants just need to answer four health related questions and their responses will impact upon the band’s performance in a variety of unexpected ways – cue guitars turning into dogs, explosions and collapsing drum kits.

Directed by award-winning director Rob Brandon, the music video is aiming to raise awareness of how different lifestyles can affect health and wellbeing. The result is a fun music video full of exciting and unusual antics. To create the video, Bupa UK and advertising agency WCRS shot 54 different clips and created 175 individual permutations.

Simon Chrisp, General Manager, Sales and Marketing, Bupa UK, says: “This innovative digital campaign highlights our new health assessments, which are all about starting a better relationship with your health. In today’s busy world, these assessments provide a chance to stop and take stock of your health and wellbeing. They give you a detailed picture of your current health, with guidance on how to move it in the right direction for the future. Working with The Futureheads has been fantastic – now I’m looking forward to seeing the public get involved and create their very own body as a band videos.”

Tom Crossley, Managing Partner, WCRS adds: “We’re really excited by this new and innovative way Bupa are talking to a hard to reach young audience who generally don’t even think about the effects their day to day habits have on their health. Hopefully if they can see the effects your lifestyle would have on a band they’ll stop and consider whether it’s the right time to get a check with Bupa. We’re extremely proud of the campaign and had a lot of fun creating the fully interactive experience with The Futureheads, in particular the 54 individually crafted music videos”

The new Bupa campaign launched on Monday April 4th and will be promoted for eight weeks via a partnership with digital media website Mashable, as well as a range of other social media, blogger outreach and digital advertising activity.