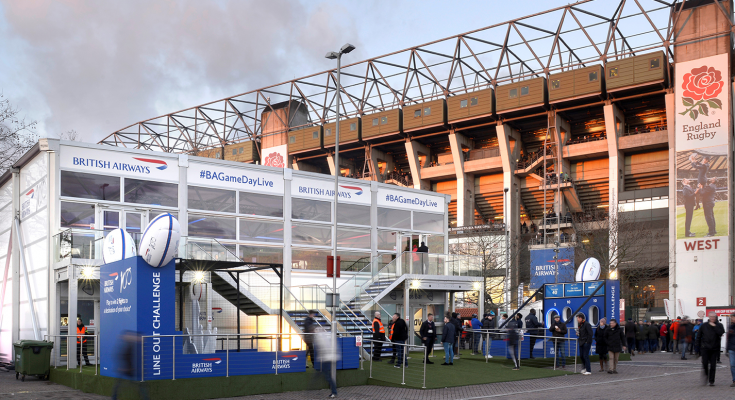 CSM Live has designed, produced and is managing a two-tier fanzone, with bars and rugby challenges, for British Airways at Twickenham. It will help to celebrate their 100-year anniversary and ramp up the excitement and enjoyment around England’s home games.

Last Sunday saw England return to Twickenham with a convincing 44-8 win over France in the Guinness Six Nations, following another bonus point win over Ireland in their first fixture of the tournament.

Celebrating their centenary milestone, and as the Principal Partner to Twickenham Stadium and the Official Airline Partner to England Rugby, British Airways entertained thousands of fans of all ages before and after the game. The fanzone activation has two challenges for fans to test their rugby skills and have a chance to win some notable prizes – including free BA flights, match tickets and signed memorabilia.

Additionally, there are two branded lounges, the Avios Lounge, which all fans are welcome to visit, and the BA Lounge, offering an exclusive area for British Airways Gold and Silver members to enjoy a complimentary drink and a view of the West Fan Village.

Paul Hicks, Director of Experiential and Events at CSM Live, said “We’re delighted to be helping British Airways engage with their audience in a very real, relevant and entertaining way. Working with their team to land at the right creative direction and seeing it brought to life has been great.”

Mitch Caputo, British Airways’ Global Partnership Portfolio Manager from British Airways, stated “The fanzone looked amazing and we were thrilled to welcome everyone aboard on Sunday. CSM Live have done a great job and we can’t wait for the next two games.”