Home industry Win with Jack is Back! Launching Year 3 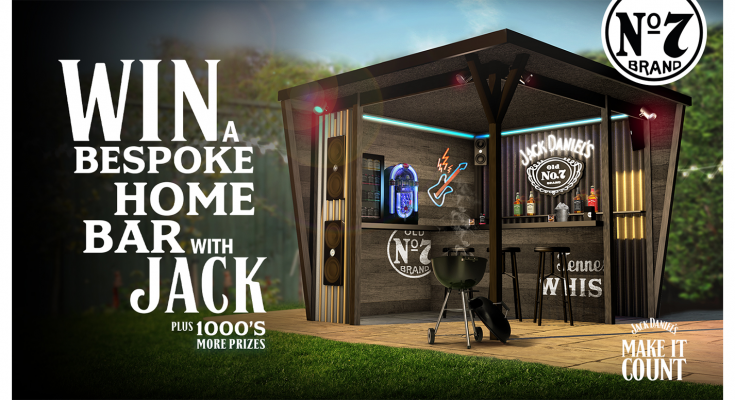 Win with Jack is back! For a third year running, Haygarth are proud to share the launch of their integrated shopper campaign in partnership with Jack Daniel’s. Exclusive to Tesco Group stores, this year’s ‘Win with Jack’ campaign sees limited edition neck tags placed on promotional bottles of Jack Daniel’s.

They’ve transformed the successful campaign to celebrate ‘The Big Night In’, and this year, are reaching out to an audience who have already rediscovered the joy of partying at home. Shoppers are invited to scan the QR code to be in with a chance to win the grand prize; a fully bespoke home bar tailored to winner’s homes and gardens – giving five lucky shoppers the chance to own the best venue in town. Alongside a huge selection of jealousy-inducing instant win prizes including a stocked Jack Daniel’s drinks cart, a Jack Daniel’s neon sign, a Jack Daniel’s branded personalized glass and a limited-edition Jack Daniel’s t-shirt, all entrants are entered into the grand prize draw.

This year, the promotion will also be running in Northern Ireland, a new extension to the campaign. Northern Ireland has ‘no purchase necessary’ legislation in place, which means that legally consumers do not have to purchase the alcohol to enter the promotion. We worked with Umbrella to personalise the NI user journey and installed advanced postcode checkers on the site which ensured that those stating they were in Northern Ireland had their postcodes checked on entering the site as well as claiming their prize if they win.

You can visit the microsite: www.winwithjack.com

Win with Jack is running from now until the 30th September 2021.