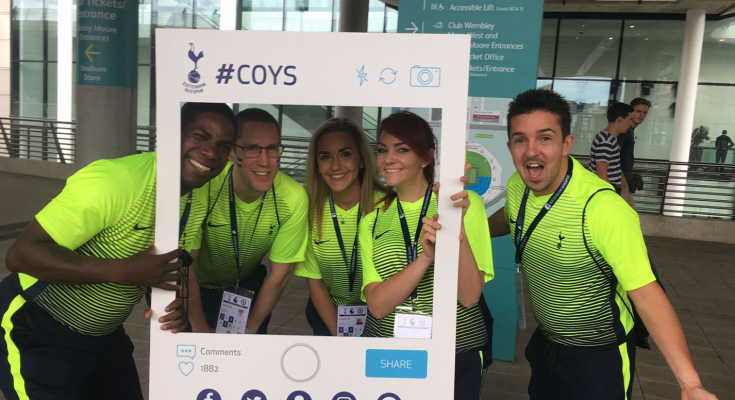 Tottenham Hotspur FC has again picked specialist staffing agency StreetPR to provide a team of ‘fanbassadors’ to welcome supporters to its games. This time they will be delivering services at the new stadium.

The first official Premier League match to take place in the new stadium will be against Crystal Palace on April 3th 2019. However, under official rules, Spurs must hold two test events before it can get a formal safety certificate.

StreetPR ‘fanbassadors’ will be deployed outside the new Tottenham Hotspur Stadium in the hours before kick-off. Their role will be to meet and greet fans and hand out flags, stadium guides, posters and offering face painting for youngsters.

The contract between Tottenham and StreetPR at Wembley was initially for one year, covering the 2017/18 football season, for all Tottenham home matches at Wembley. That contract has now been extended to cover the 2018/19 season at the new stadium.

Dorian Payne, Client Services Director at StreetPR, says: “What can I say? We were over the moon when Tottenham asked us to provide fanbassadors at Wembley, and you can imagine how chuffed we are to be working with them at their amazing new stadium. They are a worldwide brand, and we’ve been developing a whole range of new fun and engaging activities which we’ll be rolling out as the season progresses to engage fans, and drive Tottenham Hotspur’s membership sign up.”