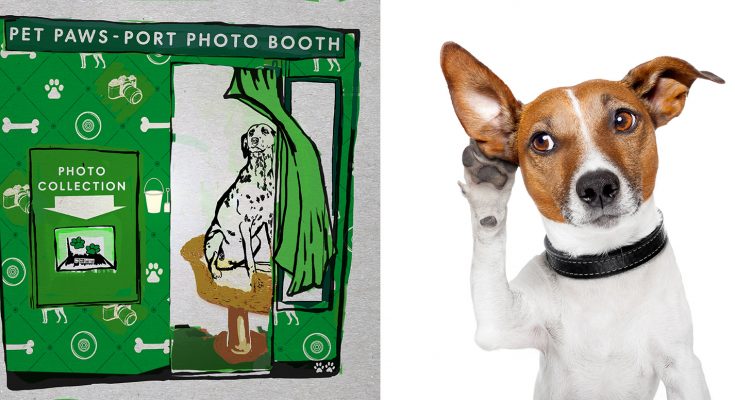 Pet insurer MORE TH>N (More Than) has launched the Pet Paws-Port Photo Booth, a free service offering dog owners the chance to have a high-quality passport photo taken of their pet pooch.

The insurers point out that pet passports have doubled over the past two years, and that one in 10 owners is considering taking their dog away with them this summer.

Located in Victoria Park, one of London’s dog walking hotspots, the Paws-Port photo booth is an experiential activation aimed at promoting the company’s insurance services for pets.

Owners and dogs who want to take advantage of the offer will first be directed to a dog grooming station, where pet stylists and groomers will be on hand to prep pets that come along to ensure they are looking their best in front of the camera. Haircuts, brushing and grooming will be available, but MORE TH>N is asking owners to ensure their dog has had a bath the night before, to make the job of grooming a lot easier for both stylists and dogs.

Once prepped and ready, dogs will pose for their photo in the Pet Paws-Port Booth, which includes:

Resulting photos which will be available in squares of four for owners to take home and use in their pet’s passport.

The Pet Paws-Port Photo Booth will be located at The Hub Café, Victoria Park, Grove Road, London E3 5TB between 11.00am and 4.00pm on Thursday June 22 2017. The event will not be ticketed; instead, a queuing system will be in place throughout the day to ensure everyone gets a perfect picture of their pet.

The Pet Paws-Port Photo Booth will also be making an appearance at DogFest, the UK summer festival for dogs and owners, on June 24 and 25 at Knebworth House, Hertfordshire (see http://dog-fest.co.uk/hertfordshire).

In January 2017, MORE TH>N launched what it said was the world’s first ever city tour bus for dogs, with every element of the experience designed to appeal to man’s best friend, in London. The tour was created to promote MORE TH>N DOGGYSSENTI>LS, a new pet care and protection offering which the insurer claims provides “all the essential items for a happy and healthy dog, delivered direct to your door each month.”