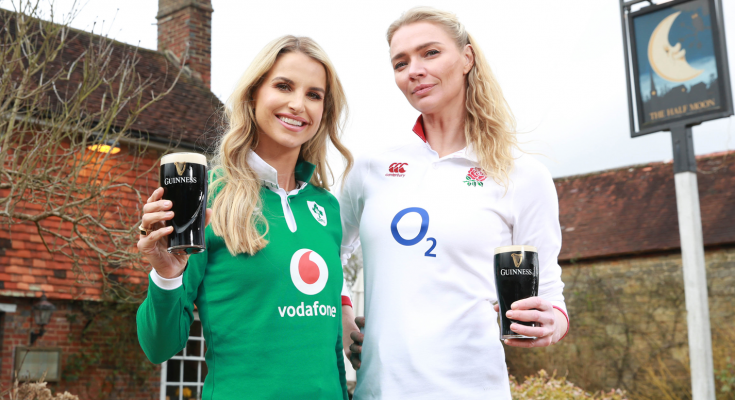 Six Nations Title Partner Guinness has partnered with celebrity publican and rugby fan Jodie Kidd for the much anticipated England vs Ireland Six Nations crunch match. The model will be hosting Vogue Williams and a lucky group of fans for a weekend in Jodie’s pub where they will then head to the game together to celebrating the friendly rivalry that exists between the two rugby nations.

Delivered by Hope & Glory, ‘Jodie Kidd Rugby Weekender’ will begin at The Half Moon in Kirdford and offer fans English countryside food and a free pint of Guinness. The group will then head to a luxury 5-star hotel nearby, waking to a full English fry-up the next day. They will then head over to Twickenham Stadium for the England vs Ireland Six Nations crunch match. Post-match, fans will be treated to a pint of Guinness at the well-known rugby pub The Cabbage Patch before heading back home.

The experience aims to bring fans and celebrities from both nations together to celebrate the friendly rivalry that the Guinness Six Nations embodies. Whatever the outcome of the match, a pint of GUINNESS will be shared between both sets of fans, ensuring they come as rivals but leave as friends.

Jodie Kidd says: “I’ve always been a huge rugby fan and think the friendly rivalry that takes place between the nations in the Guinness Six Nations is great fun! I can’t wait to meet the group of Irish fans coming to my pub and to enjoy a pint of Guinness with them and Vogue ahead of the showdown at Twickenham.”

Vogue Williams says: “The friendly rivalry during the Guinness Six Nations is something I’m very familiar with seeing as I’m Irish and my other half is English! I’m so excited to get to know the Irish fans at Jodie’s pub and to experience the game altogether – hopefully, we’ll have the luck of the Irish and win!”

The ‘Jodie Kidd Rugby Weekender’ is the second of a series of experiences that the Guinness Team is putting on to celebrate the friendly rivalries across the union of rugby.