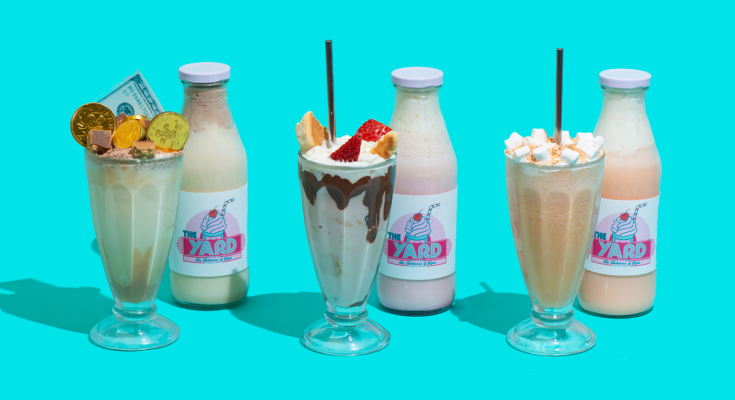 To celebrate the 20th anniversary of singer Kelis’ debut album Kaleidoscope, Deliveroo is bringing everyone to the yard with their pop-up milkshake bar.

Taking inspiration from her iconic smash hit, Milkshake, ‘The Yard’ by Kelis and Deliveroo, will be serving a variety of milkshakes that pay homage to her 20-year career in music.

Delivered by Talker Tailor, Trouble Maker, the pop-up milkshake bar will open on Wednesday 18th March on 46 Great Eastern Street, London, at 1pm, the day after her show at London’s iconic Roundhouse, offering fans the chance to enjoy Kaleidoscope themed milkshakes with Kelis.

The milkshakes come in a range of five flavours, all named after iconic songs from the Kaleidoscope album:

Inspired by the red planet and recreating the brick red colour of martian landscape using Kelis’ recommended combination of cherry and espresso, with crunchy crumb rim, garnished with dry ice and Aero crumb.

I Want Your Love

Super indulgent creamy coconut milkshake but made fully vegan and free of refined sugar, topped with a mountain vegan marshmallows.

Kelis commented: “After all these years the fact Milkshake still resonates is great. I think it’s a testament to the art form and how people can take a song and turn it into a metaphor for anything they want it to be, which in my opinion has created a universal connection for people everywhere. And then to be able to take the song and find a way to tie into all that I’m doing around my Kaleidoscope anniversary tour and reissue is a cool way to bridge two worlds while doing something fun for my fans!”

Joe Groves, Head of Consumer Comms at Deliveroo says, “Who wouldn’t want to come and make milkshakes with Kelis and see if they can bring all the boys to the yard? I can’t believe it’s been 20 years since her first album Kaleidoscope was released. Those wanting to get their hands on a milkshake need to head to 46 Great Eastern St, London on Wednesday 18th and Thursday 19th March, for a chance to mix up some shakes with Kelis. Each milkshake is super indulgent and pays homage to the singer’s 20-year career in music.”

For those who can’t make it to the pop-up, the limited-edition milkshakes will also be available to purchase on the Deliveroo app in Manchester and Cambridge from Thursday 19th March.