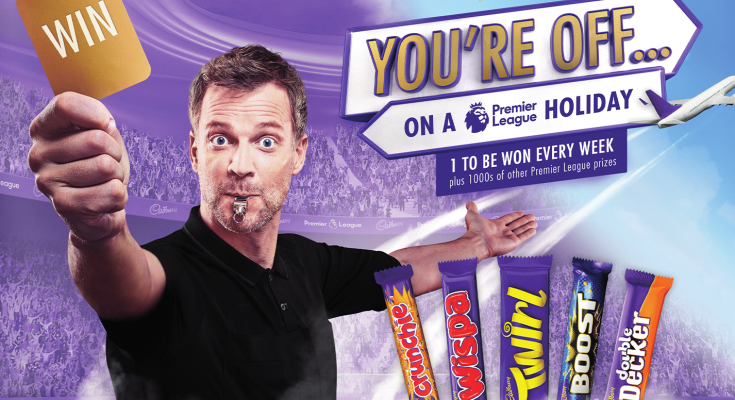 Cadbury campaign to send fans off on a Premier League holiday

As the Premier League has come to a dramatic close, Cadbury kicked-off its second end-of-season promotion, offering fans the opportunity to jet off on a summer getaway!

The ‘You’re off’ campaign created by BD Network, saw the notorious ‘red card’ in football given a ‘Cadbury twist’, offering consumers the chance to be sent off with a gold card – on a Cadbury FC holiday with a Premier League experience. There are five holidays up for grabs including a trip to Australia to watch Man United play Perth Glory and to Singapore to see Tottenham Hotspur play in their pre-season tour.

Shoppers will also be in with the chance of winning 50 pairs’ of Premier League tickets for the 2019/20 season alongside football-themed goodies including key-rings and drawstring bags.

The competition is supported by a £1m marketing spend, including investment in out-of-home, social media including Instagram and Facebook, radio and PR support.

Seana Fitzgerald, Cadbury Brand Manager at Mondelez International, said: “We were looking for a campaign that leveraged the Premier League sponsorship to drive success and consumer engagement. BD Network have embraced this vision, while maintaining the essence of our brand, triggering excitement and enhancing the fan experience.”

Lara Mitchinson, Account Director at BD Network, said:“Our aim was to create a Premier League campaign that excited football fans, as well as appealing to a wider audience who would still be engaged with the prize offering. Our creative is disruptive in a playful manner, ensuring Cadbury has strong visibility’

To enter, Cadbury consumers simply need to visit the bespoke ‘You’re Off’ website at youreoff.cadburyfc.com and type in the barcode of the product that they have bought for the chance to win.

‘You’re off’ promotion will run from April 29th to June 7th across the Cadbury singles range.