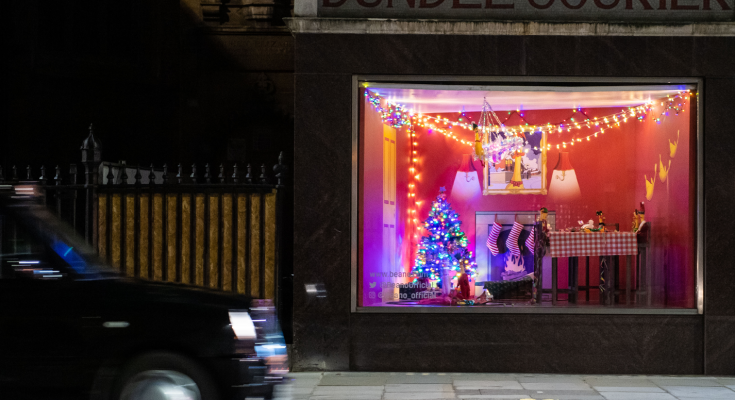 This morning passers-by were surprised with a unique insight into the rubber chicken’s home  over the Beano HQ window to gather for a Christmas meal.

Inspired by the immense popularity of rubber chicken content on Beano.com, the window design follows the success of 2018’s display which saw a choir of rubber chickens brought to life by members of the public at the pressing a button which performed a special poultry cover of Jingle Bells.

Rubber chickens including Macaulay Clukin, Fi Lyn Clucky and Nin Hendo will be taking over content creation on Beano.com during the holiday season with festively fowl quizzes games and jokes.

Throughout December Beano.com is hosting a digital advent calendar full of fun surprises. Opening the first door will give kids the chance to design their very own rubber chicken by taking Beano’s Ultimate Christmas Quiz. One lucky winner will have their design featured in the picture frame above the fireplace in the Fleet Street window display and take home a bundle of Beano goodies.

Mike Stirling, Editorial Director at Beano, said: “Someone must have left Gnasher’s dog flap open at Beano HQ as the rubber chickens have come home to roost for the holidays in our window and on Beano.com! From quizzes to videos, our festive season is about being turned up to elev-hen. So save your turkey for the dinner table… because these birds mean business. (Funny business, that is).”

The window will be on display until 3rd January after which all rubber chickens will be donated to Battersea Dogs & Cats home to be gifted as toys to dogs staying at the shelter.