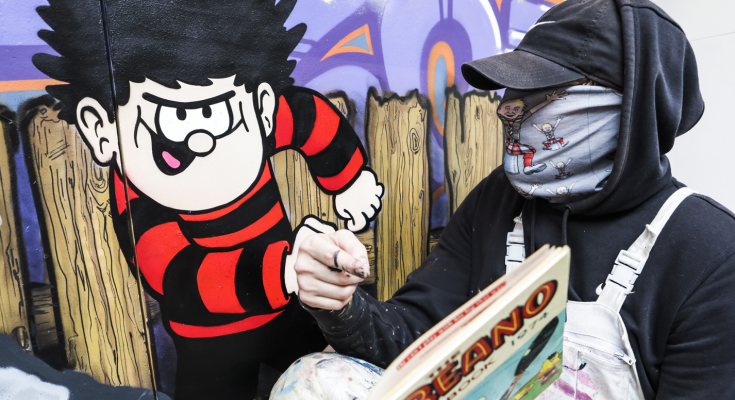 Beano Studios have today unveiled a unique and bespoke piece of street art in the window of their London Fleet Street offices created by one of their licensees; the mysterious and anonymous graffiti artist known as Sleek.

The Scottish based artist, whose identity is a closely guarded secret, produces his original artworks, limited editions and merchandise under license from Beano Studios.

Whilst being classically trained, Sleek’s style comes about by combining street art with pop art to create a new fresh style which now hangs on the walls of celebrity homes and prestigious galleries across the UK.

Sleek, created the newly commissioned artwork live in the window of the Beano HQ to the excitement of the passing public. Taking many hours to complete, the artwork was created with multi layers of graffiti and tags, using a mix of spray paints and hand cut stencils.

Angeles Blanco, Director of Global Licensing at Beano Studios, said: “We’re delighted to unveil this unique piece, custom made for us here at Beano Studios and we look forward to seeing what Sleek will create for us in the future.”

Sleek, who is exclusively represented by fine art publishing house Covell Publishing, said: “It was amazing to be invited to London by Beano Studios to create this art installation and it’s a real honour to have my work displayed in the Beano London HQ window for two weeks. Beano and DC Thomson have always been a big inspiration to me so I’m thrilled to have the opportunity to give them something back. Characters like Dennis and Gnasher are so iconic they instantly remind the audience of their childhood and lets them escape to a new world as well as reminding adults that you’re never too old to have fun!”

TAGbeano brand activation street art
Previous PostGousto helps families whip up a wagamama at home Next PostNew research reveals shoppers are captivated by luxury brands, but let down by the digital experience