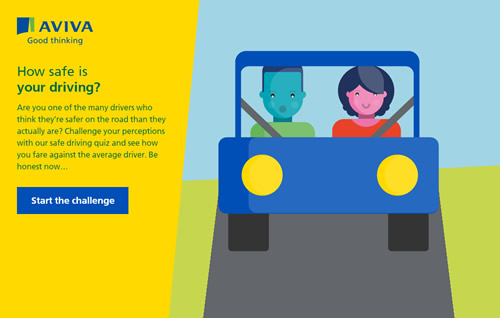 Insurance company Aviva has been running experiential activity at Waterloo Station asking people to vote for who they thought were better drivers.

The challenge supports its current advertising campaign, where an ordinary family competes to see which of them is the better driver.

Passers-by were given options including Women vs. Men, under 60s vs. over 60s, Mums vs. Dads and so on. The public could cast their vote via Twitter using voting buttons placed on the experiential stand.

As a voting button was pressed, an automatic tweet was released and the results of the poll were displayed in real time on digital out-of-home poster sites showing the campaign’s ads, including the giant Waterloo Motion screen in front of the stand.

People could visit the site to cast their vote or vote on Twitter by using hashtags like #over60sdrivesafer or #under60sdrivesafer.

The activity generated nearly 2,000 votes which were fed into the Liveposter system and displayed onto the Motion screen.

The activity was part of the insurance firm’s current campaign, which includes a TV ad and other messaging that urges motorists to test their own driving skills using the free Aviva Drive app.

The app rates how safely people drive, based on acceleration, braking and cornering over 200 miles. The campaign is the first initiative launched as part of Aviva’s new global brand strategy, Good Thinking.

Using smartphone technology that records the motorist’s driving style, users of the Aviva Drive app will be given an individual score out of 10. Drivers may then be able to use their score to achieve discounts on their Aviva car insurance.

Apparently, people who score above 7.1 out of 10 on the app can qualify for lower rates from Aviva which could get them on average £150 off their Aviva car insurance.

As well as the app, people will be encouraged to think about their own personal driving behaviours with a series of interactive tools which will be available online during the campaign.

The campaign will also include outdoor advertising, social media and radio and TV promotions.

Lindsay Forster, UK & Ireland Customer Marketing Director for Aviva, said of the new app: “The app is a fantastic way for people to test how safely they drive and we’d encourage as many people as possible to take the challenge. We also believe it’s good thinking to reward safer drivers with lower premiums, so as well as encouraging drivers to make our roads safer, motorists could see the benefits in their bank balances too.”