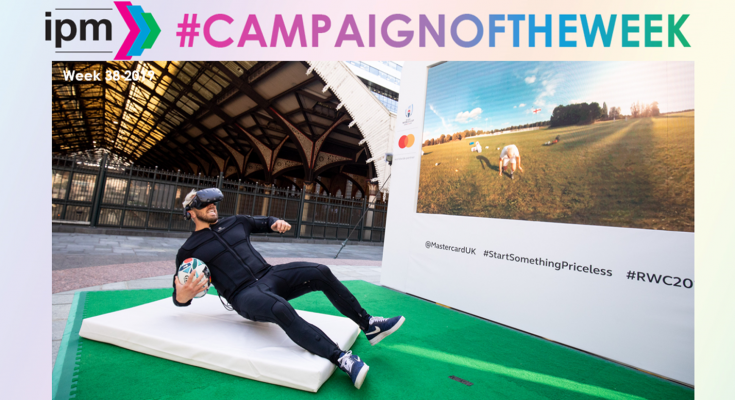 Mastercard unveiled a first of its kind virtual reality (VR) tackle, allowing members of the public to feel the power of a professional tackle, using a haptic feedback bodysuit in a full virtual reality rugby experience.

Its launch follows research that nearly a fifth (17%)* of the UK said the thought of being tackled was enough to put them off giving rugby a go themselves.

The research was commissioned by Mastercard as part of its worldwide partnership with Rugby World CupTM.

Chris Robshaw, Mastercard Ambassador and England & Harlequins Player, said: “It’s a strange experience, being tackled by myself, never thought I’d be doing that! The Contactless Tackle is a great way to bring fans together and introduce people to rugby if they haven’t played before. The technology is amazing, and I hope it will encourage more fans to get involved with the sport.”

To experience the Contactless Tackle, fans wore a haptic Teslasuit, that uses muscle stimulation to recreate the feeling of the England legends’ rugby tackles as well as VR goggles for a full 360-experience.

Participants could also choose which team they represented – England, Scotland, Ireland or Wales – before seeing if they could withstand the force of the tackle from one of England’s rugby stars.

Maggie Alphonsi, Mastercard Ambassador, said: “As a Mastercard ambassador, I have a great opportunity to introduce more people to the sport. It’s exciting to be able to share my professional rugby experience with fans in a new way thanks to virtual reality and incredible technology. It’s also important for me to be able to encourage and inspire women across the UK to get involved with rugby – it really is a turning point for women in sport right now and I’m pumped to be a part of it.”

Jason Robinson, Mastercard Ambassador and World Cup Winner, said: “In my role as a Mastercard rugby ambassador I love to meet fans of the game, and to see their faces when I surprised them after the Contactless Tackle was priceless. I’m really excited for Rugby World Cup 2019TM this year, especially being in Asia for the first time – bring it on!”

Now in its eighth year of sponsorship of both the men’s and women’s Rugby World Cup, Mastercard is encouraging fans of all ages to get together during the tournament to create priceless memories.

Nicola Grant, Head of Marketing and Communications, UK, Ireland, Nordics and Baltics at Mastercard, said: “As a Worldwide Partner for Rugby World Cup 2019 TM and with our ambassadors, we hope to connect fans with their favourite sporting idols in new and unexpected ways. This experience gives fans the opportunity to get closer to the sport than ever before and feel what it’s like to play against some of the world’s great rugby players.”

Previous PostNew research reveals shoppers are captivated by luxury brands, but let down by the digital experience Next PostBateman promoted to Business Director as Experience12 continues year of expansion