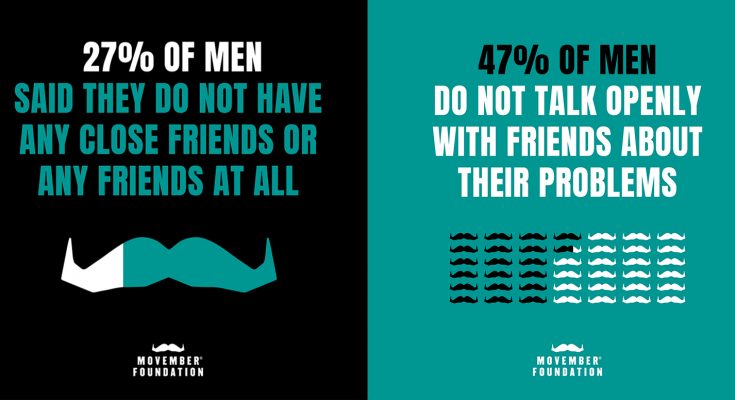 New research launched by the Movember Foundation reveals nearly half (47%) of men feel they are unable to confide in friends about their problems, compared to 63% of women who do.

This may be attributed to men having fewer social connections. On average, the men who were surveyed said they had three close friends, although nearly a third (27%) said they did not have any close friends or any friends at all.

The research also revealed that these friendships get weaker as they get older with men aged 55+, spending half the amount of time with friends than 16-24-year-olds. Over one in five (22%) men in this 55+ age group said they never saw their friends for a catch up.

Almost two in three men aged 16-24 (67%) would prefer to be known for having a ‘short fuse’ than ‘vulnerable’, and almost half (47%) would rather speak to a salesman for half an hour than a counsellor further highlighting the belief that men are reluctant to talk about their problems and feelings.

A previous study from the University of Harvard has shown that the biggest indicator of long-term health and well-being is the strength of your relationships with family, friends and spouses. According to the study, having someone to rely on has many health benefits, including helping your nervous system relax, your brain stay healthier for longer, and reduces both emotional and physical pain.

The Movember research also found men aren’t creating opportunities to meet up with their friends, for example; nearly two in five never go out for drinks (38%) or food (38%) with their close friends. Further to this when it comes to life challenges, only one in 10 (10%) of men go to family and friends for help when they face a challenge in life.

Owen Sharp, CEO of the Movember Foundation said: “Previous studies have proven that poor social connections have a negative impact on physical and mental health and this has to change. This is what the whole month of Movember is all about and the year-round initiatives we fund to tackle social isolation and loneliness. Three out of the four people who take their own lives every year are men and it’s the biggest killer of men under the age of 44.”

Movember’s annual month-long fundraiser calls on men across the UK to grow a moustache. The campaign aims to not only to raise awareness and funds, but to encourage men to connect with friends and create real change for men’s health. The charity also invests in innovative year-round projects that help foster quality relationships, whilst building the evidence of what works to support men building and maintaining stronger social connections.

One example of this is the Men’s Pie Club in Newcastle; socially isolated men are brought together to learn the skills they need to cook and create great food, as well as an opportunity to build relationships with each other. Another is Brothers Through Boxing in Peterborough, which provides boxing training sessions to young men who are not in employment, education or training, and who are at risk of social isolation and loneliness. Through training and coaching they are able to build social relationships among other young men, leading to a stronger sense of belonging, and a greater ability to stay mentally healthy.

The Movember Foundation is the leading charity dedicated to changing the face of men’s health in the UK and around the world. The foundation recognises that men are dying six years younger than women around the world. It campaigns to ensure that men take their health more seriously and act when necessary, as well as raising funds for vital research to combat prostate cancer, testicular cancer and male suicide. The foundation is aiming to reduce the number of men dying prematurely by 25% by 2030. 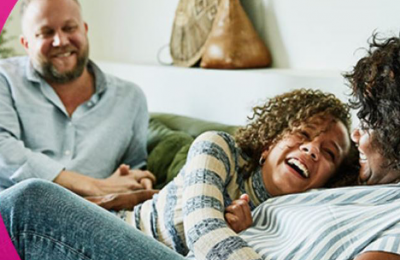